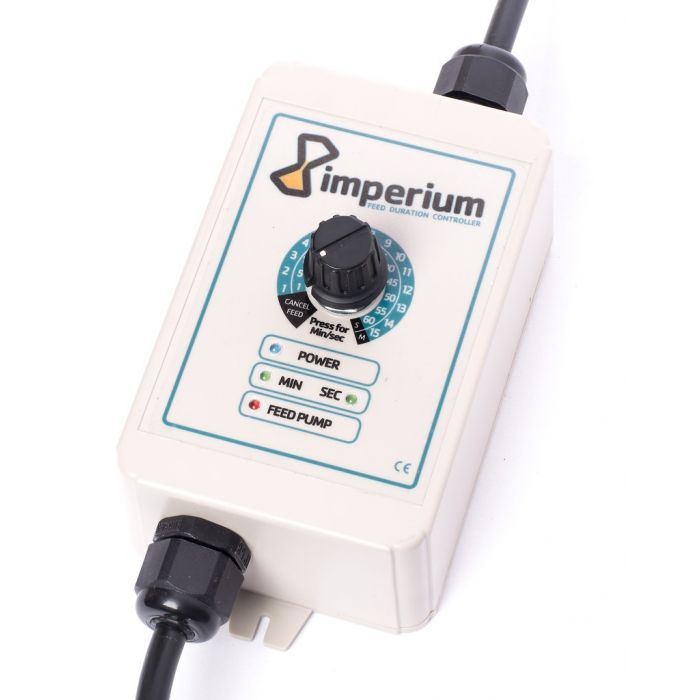 Images and Videos for this product

Free Delivery
On all orders over £100.00
CLICK & COLLECT
PRODUCT DELIVERY

The Imperium minutes or seconds controller can be used with any timed grow system, it has 28 feed settings that can feed from 1 second up to 15 minutes, at the push of a button. Finely tuning your feed durations is proven to increase nutrient uptake and oxygen absorption – ultimately resulting in bigger yields.

The Imperium is a precision feed controller, which offer’s greater control over feeding duration and frequency to match each life-stage in a plants growth. It allows you to feed little and often which will produce maximum yields.

When using a segmental timer with a timed grow system the minimum feed can only be set to 15 minutes.

When using the Imperium controller a larger number of shorter feeds can be set, for example instead of 15 minutes 2x a day you can feed for 5 minutes 6x a day.

The plants won’t have to wait so long between feeds and will have oxygen refreshed 6x per day instead of 2x per day. This action of getting more oxygen to the roots will promote healthier plants with bigger harvests.

It has a simple push button control, LED’s illuminate to let you know when you’ve switched from minutes to seconds and vice versa, whilst also indicating when the power is on and the feed pump is engaged.

Imperium can be used alongside any timed grow system with an additional segmental timer like the Powerplant Heavy Duty Timer.

We strive to provide the best service possible, with the highest regards to quality and shipping.

Here's what you can expect when placing an order with The Hydroponics Store:

You'll receive an email and text message providing you with a tracking number once your package has been sent out.