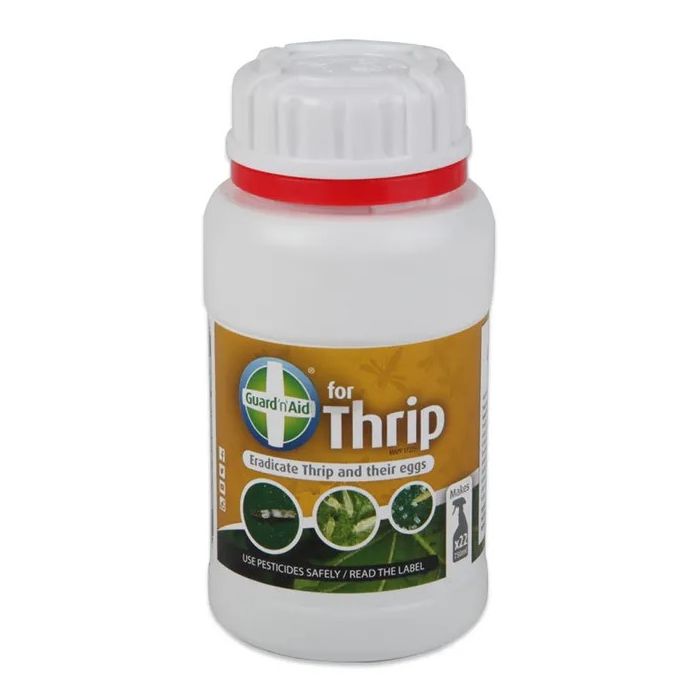 Images and Videos for this product

Free Delivery
On all orders over £100.00
CLICK & COLLECT
PRODUCT DELIVERY

Targeted contact insecticide for use against Thrip in all edible and non-edible crops. Guard ‘n’ Aid for Thrip controls and acts quickly against eggs, larval stages and adult stages. Its Pyrethrum based and works both indoor and outdoor including on hard surfaces.

Its main active ingredient is Pyrethrum which has been used for centuries as an insecticide! Pyrethrum is an oil based natural insecticide made from the dried flower heads of Chrysanthemum and targets the respiratory organ and nervous system of insects. It’s considered to be amongst the safest insecticides for use around food.

How to Use Guard ‘n’ Aid for Thrip

Thrip are extremely active so make sure all surfaces are wetted avoiding direct contact with open flowers. Make sure you get good spray coverage of the sites where the Thrip is found, including the underside of the leaf. Repeat after 14 days to maintain control.

We strive to provide the best service possible, with the highest regards to quality and shipping.

Here's what you can expect when placing an order with The Hydroponics Store:

You'll receive an email and text message providing you with a tracking number once your package has been sent out.